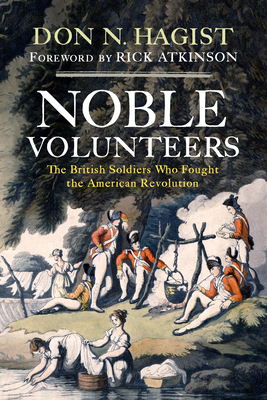 Winner of the 2020 American Revolution Roundtable of Philadelphia Book of the Year
Redcoats. For Americans, the word brings to mind the occupying army that attempted to crush the Revolutionary War. There was more to these soldiers than their red uniforms, but the individuals who formed the ranks are seldom described in any detail in historical literature, leaving unanswered questions. Who were these men? Why did they join the army? Where did they go when the war was over?
In Noble Volunteers: The British Soldiers Who Fought the American Revolution, Don N. Hagist brings life to these soldiers, describing the training, experiences, and outcomes of British soldiers who fought during the Revolution. Drawing on thousands of military records and other primary sources in British, American, and Canadian archives, and the writings of dozens of officers and soldiers, Noble Volunteers shows how a peacetime army responded to the onset of war, how professional soldiers adapted quickly and effectively to become tactically dominant, and what became of the thousands of career soldiers once the war was over.
In this historical tour de force, introduced by Pulitzer Prize winner Rick Atkinson, Hagist dispels long-held myths, revealing how remarkably diverse British soldiers were. They represented a variety of ages, nationalities, and socioeconomic backgrounds, and many had joined the army as a peacetime career, only to find themselves fighting a war on another continent in often brutal conditions. Against the sweeping backdrop of the war, Hagist directs his focus on the small picture, illuminating the moments in an individual soldier’s life—those hours spent nursing a fever while standing sentry in the bitter cold, or writing a letter to a wife back home. What emerges from these vignettes is the understanding that while these were “common” soldiers, each soldier was completely unique, for, as Hagist writes, “There was no ‘typical’ British soldier.”

“No one has studied the British enlisted ranks in the Revolution with greater diligence and insight than Don N. Hagist. Now he has given us a remarkable group portrait of these men, illuminating who they were, why and how they fought, and what their lives were like.”—Rick Atkinson, author of The British Are Coming: The War for America, Lexington to Princeton, 1775–1777, from the foreword to Noble Volunteers

“Anchored upon vivid vignettes of military life, many taken from previously unpublished documents, Noble Volunteers is a significant, ground-breaking study that reconstructs the entire arc of the humble redcoat’s experience, from recruitment to demobilisation. Above all, it restores humanity to the thousands of rank-and-file soldiers who fought so tenaciously in an ultimately futile effort to keep the rebellious American colonies within the British Empire.”—Stephen Brumwell, author of Turncoat: Benedict Arnold and the Crisis of American Liberty

“Don Hagist has written what will prove to be the definitive account of British soldiers who fought in the American Revolution. Compelling, interesting, and brilliantly conceived—using previously unpublished records, Hagist’s impeccable research unearths the hidden war of the British enlisted men during the Revolution.”—Patrick K. O’Donnell, author of Washington’s Immortals

“Few American readers know anything about the British soldiers who fought against their colonial forefathers during the Revolutionary War. This book solves that problem by delving into myriad primary sources to illuminate details of the lives of the British soldiers who fought and died so far from home. The author, Don N. Hagist, is the editor of the Journal of the American Revolution, and he knows this subject well. . . . Only a few British soldiers left accounts of their days in uniform, but the author has conducted impressive research in archives located in the United Kingdom, as well as in Canada and the United States, in order to produce this very thorough study. All those readers who are interested in the American Revolution will definitely want to add Noble Volunteers to their military libraries.”—Journal of America’s Military Past