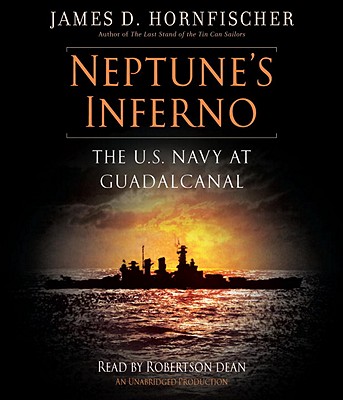 By James D. Hornfischer, Robertson Dean (Read by)
$45.00
Email or call for price.

With The Last Stand of the Tin Can Sailors and Ship of Ghosts, James D. Hornfischer created essential and enduring narratives about America’s World War II Navy, works of unique immediacy distinguished by rich portraits of ordinary men in extremis and exclusive new information. Now he does the same for the deadliest, most pivotal naval campaign of the Pacific war: Guadalcanal.

Neptune’s Inferno is at once the most epic and the most intimate account ever written of the contest for control of the seaways of the Solomon Islands, America’s first concerted offensive against the Imperial Japanese juggernaut and the true turning point of the Pacific conflict. This grim, protracted campaign has long been heralded as a Marine victory. Now, with his powerful portrait of the Navy’s sacrifice—three sailors died at sea for every man lost ashore—Hornfischer tells for the first time the full story of the men who fought in destroyers, cruisers,  and battleships in the narrow, deadly waters of “Ironbottom Sound.” Here, in brilliant cinematic detail, are the seven major naval actions that began in August of 1942, a time when the war seemed unwinnable and America fought on a shoestring, with the outcome always in doubt. But at Guadalcanal the U.S. proved it had the implacable will to match the Imperial war machine blow for violent blow.

Working from new interviews with survivors, unpublished eyewitness accounts, and newly available documents, Hornfischer paints a vivid picture of the officers and enlisted men who took on the Japanese in America’s hour of need: Vice Admiral William “Bull” Halsey, who took command of the faltering South Pacific Area from his aloof, overwhelmed predecessor and became a national hero; the brilliant Rear Admiral Norman Scott, who died even as he showed his command how to fight and win; Rear Admiral Daniel Callaghan, the folksy and genteel “Uncle Dan,” lost in the strobe-lit chaos of his burning flagship; Rear Admiral Willis Lee, who took vengeance two nights later in a legendary showdown with the Japanese battleship Kirishima; the five Sullivan brothers, all killed in the shocking destruction of the Juneau; and many others, all vividly brought to life.

The first major work on this essential subject in almost two decades, Neptune’s Inferno does what all great battle narratives do: It cuts through the smoke and fog to tell the gripping human stories behind the momentous events and critical decisions that altered the course of history and shaped so many lives. This is a thrilling achievement from a master historian at the very top of his game.

James D. Hornfischer is a writer, literary agent, and former book editor. He is the author of "The Last Stand of the Tin Can Sailors "and "Ship of Ghosts," both widely acclaimed accounts of the U.S. Navy during World War II in the Pacific. "From the Hardcover edition."

Selected as a Best Book of 2011 by Military History Quarterly

“With the publication of Neptune's Inferno, a masterpiece of 20th century naval history, it's time to declare James Hornfischer a national treasure, a member of the distinguished band of brothers--Stephen Ambrose, Shelby Foote, Ken Burns, Spielberg and Hanks--whose sacred mission has been vital to America's journey, preserving the stories of our fathers and grandfathers for future generations, before those stories fade forever out of our consciousness into the shadows of time.”
Bob Shacochis, National Book Award winner, author of The Immaculate Invasion

"Hornfischer has produced an account that is visceral, yet technical; sweeping, yet personal. It’s a terrific read, and an important new addition to the literature on this most important naval campaign in the Pacific."
—Jonathan Parshall, co-author of Shattered Sword: The Untold Story of the Battle of Midway

"Hornfischer’s accounts of naval combat in the Pacific are simply the best in the business."
—Ian W. Toll, author of Six Frigates: The Epic History of the Founding of the U.S. Navy

"With this grand, sweeping, history-correcting book, James Hornfischer takes his place among the elite historians of the United States war in the Pacific during World War II. Like a Curtiss Helldiver, Neptune’s Inferno catapults the reader high into the skies for a clear perspective on the vast oceanic conflict, then dives relentlessly to propel us right into the smoke and fire and human valor of the brutal inferno known as Guadalcanal. Along the way, and drawing on newly available papers, Hornfischer clears up lingering misconceptions about this battle, including the full extent of the U.S. Navy’s role in victory. And in his character portraits of the brilliant, quirky top admirals and generals of the fractious Army-Navy command, Hornfischer offers a worthy counterpart to Doris Kearns Goodwin’s Team of Rivals."
—Ron Powers, author of Mark Twain: A Life and co-writer, Flags of Our Fathers

"Neptune’s Inferno is a superb portrait of the U.S. Navy’s critical role in the Guadalcanal campaign, both the surface and aerial combat. Comprehensive with much that is new, yet immensely readable, it covers not only the admirals, but the junior officers and bluejackets as well. Highly recommended."
―John B. Lundstrom, author of The First Team

“An epic work…In Neptune's Inferno: The U.S. Navy at Guadalcanal, Hornfischer deftly captures the essence of the most pivotal naval campaign of the Pacific war…Compiling interviews with survivors, unpublished eyewitness accounts, and previously unavailable documents, [he] skillfully re-creates the bravery displayed by sailors who opposed the Japanese in what could be called America's finest hour of the Pacific campaign. The book is richly supported by meticulous source notes, a concise bibliography, rare photos and campaign maps…With Neptune's Inferno, Hornfischer…has earned his place among the hallowed ranks of military historians. [It] is a literary tour de force that is destined to become one of the most definitive works about the battle for Guadalcanal. It deserves a place of honor on every military bookshelf.” – San Antonio Express-News

“Ambitious…entertaining…insightful…judicious…A vivid and engaging account…of war at sea in 1942.” —Ronald Spector, The Wall Street Journal
“Neptune’s Inferno is well written, packed with scene-setting details and clearly the product of extensive research, including interviews with some of the battle’s now-aged survivors… The author’s two previous WWII books, The Last Stand of the Tin Can Sailors and Ship of Ghosts, thrust him into the major leagues of American military history writers. Neptune’s Inferno is solid proof he deserves to be there.” –Dallas Morning News

“Hornfischer (Ship of Ghosts) understands the human dynamics of the U.S. Navy in the Pacific war…[he] gives an empathetic but balanced account…[reconstructing] the fighting in a masterful synthesis of technical analysis, operational narrative, and tales of courage.” –Publishers Weekly

“Outstanding… The author offers balanced assessments of the leaders on both sides, but the real heroes are the American bluejackets, who too often paid with suffering and death for those leaders’ slowness to learn. And as in his first two books, the author’s narrative gifts and excellent choice of detail give an almost Homeric quality to the men who met on the sea in steel titans.” –Booklist (starred review)

“This work's major strengths are its careful organization, readable prose, and...well-reasoned conclusions. Depictions of battles and ships are enlivened with...apt comments from participants and relevant character sketches of the key figures.” –Proceedings Magazine

“Neptune’s Inferno is an exceptional piece of military history. Hornfischer has broadened and deepened our understanding of the U.S. Navy’s role in the Solomons campaign in this eminently readable account of the bloody naval battles of attrition in the fall of 1942 that doomed the Imperial Japanese Navy to defeat and irrevocably shifted the strategic initiative in the Pacific War.” —Dr. Peter R. Mansoor, colonel, U.S. Army (ret.), Gen. Raymond E. Mason Jr. Chair in Military History, The Ohio State University

"With good maps and extensive documentation, this is gripping and readable, not a dry military report." —Library Journal

“The star of this year’s reading list is James D. Hornfischer, a military historian whose flair for narrative is rivaled only by his ability to organize the sweep of battle and assess strategy and tactics in layman’s terms.” —Cleveland Plain Dealer